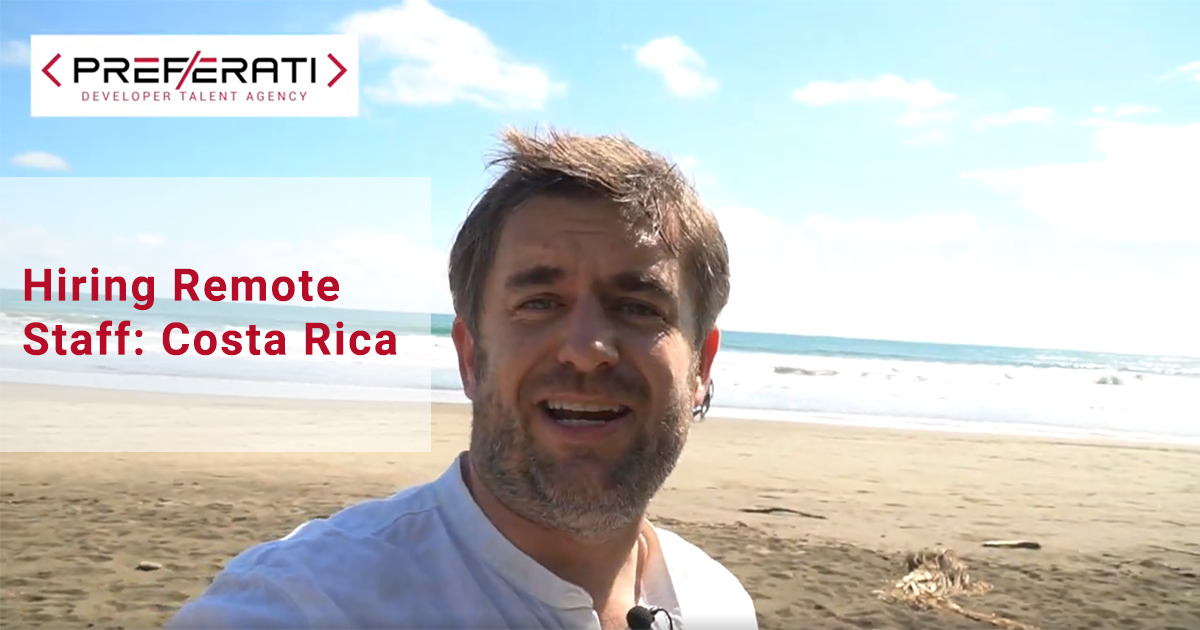 Hello, I’m Matt with Preferati Developer Talent Agency, and today I’m in beautiful Costa Rica, which is probably going to figure into your Latin American sourcing a little bit. If not as just a pit stop along the way.

Costa Rica has wonderful developers and great software talent. Unfortunately, the value proposition is not as strong as in other Latin American countries. You’re going to pay, all-in, all things considered, about as much for a Costa Rican developer as you might pay for one in the States. So the value is not necessarily there. However, the talent is strong and if price isn’t a factor I highly recommend Costa Rican developers. If you’re serious about that, I would refer you to First Factory, which is an agency based out of Costa Rica that has wonderful people.

So, Why Costa Rica?

First, Costa Rica is very strategically positioned. It is right in between the two continents. So, if you’re doing anything in South America to recruit Latin American developers, Costa Rica makes a great pit stop along the way.

It’s about an 8-hour journey from most US cities to Costa Rica, and it’s an incredibly friendly place for Americans to be. They’re all set up for us. They’ve got plenty of English speakers, they’ve got a big tourism industry, and the country is just absolutely gorgeous. It’s a great place to stop, either on your way down to South America or on your way back. You can stop for three or four days and have some adventures, go sightseeing, kick back, hang out on the beach or tour a volcano. Costa Rica has so much to offer in terms of eco-tourism and just amazing sites to see.

3. Everything is Set Up for US Citizens

Costa Rica was really my first foray into Latin America, and it’s a great place to get your feet wet. It’s Latin America lite. They’re all set up for us, just like Cancun. They have package deals, tour buses, and lots of English speaking professionals who are ready to take care of you. Alongside that, the prices are also about what you’ll pay in Cancun or in the States. So, it’s not a good cost savings play, but again if that’s not your concern, Costa Rica is a great way to mix business and pleasure. If you’re heading to South America, I highly recommend taking three or four days, even a week, in Costa Rica, probably on the way back, to kick back and relax.

Costa Rica is also a great place to meet up with your Latin American developers, to have a year-end retreat and to bring your company down. Again, it’s all set up. They’ve got the buses, the hotels, the Air BnB’s. Everything is packaged and ready for you, and you just show up and have a good time. And I assure you it really is a great time. Pura vida from Costa Rica!