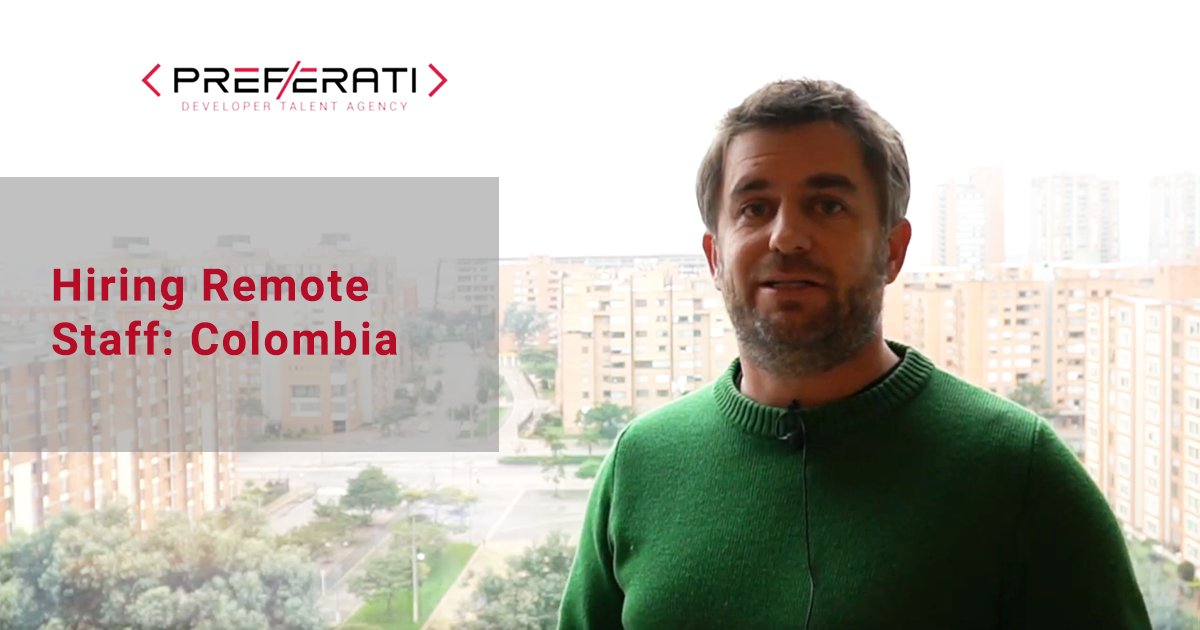 Greetings from Bogota, Colombia. I’m in Colombia. Why else, to meet with developers and find some of my next coding rock stars. So, if you’re looking to staff out of Latin America, Colombia should definitely be near the top of your list.

Bogota is One of the Largest Cities in Latin America

The city of Bogota is the fourth largest in Latin America, in terms of economy. It has a workforce of over 4 million people, and its college system produces more than 94,000 graduates a year.

Colombia is the Highest Value Country to Staff From

Things are constantly changing, but currently, Colombia is possibly the highest value country to staff out of. The reason for this is that the development community has really come into its own. You have highly trained, highly experienced developers in Bogota and throughout Colombia. Still, the country hasn’t quite been discovered yet by the big companies. So, Google, Microsoft, and Amazon have not opened their remote development centers here like they have already in Costa Rica and Mexico and other major countries. That’s an opportunity for folks who want to come in and recruit developers because wages have not been driven up by those big companies, yet.

That’s not to say that Colombian developers are cheap. However, on the value scale, in terms of what you get, you’re going to do a little bit better in Colombia than some other places, on average, right now. Of course, there are exceptions all over the place.

English is Weaker Than Other Countries

One thing I have noticed with Colombian developers is, on average – and there are certainly many exceptions – the English is a little weaker. I think that’s partially due to what I just spoke about, which is that there are fewer US companies doing business here. And so, the English experience tends to be a little bit less.

Most developers in Bogota right now are working for other Latin American companies who use Spanish predominantly. So, you will probably have to spend a solid three months really jelling the communication. Now, they do all speak English; it’s just a matter of how fluent they are. And again, there are certainly exceptions. I’ve spoken with Colombians whose English is absolutely fluent, where it sounds like they speak English as a first language. But, on average, I’ve found that the English here is not quite as strong as it is in say Mexico.

Colombia is No Longer the Dangerous Country it Once Was

Now, one concern you might have is that, in the United States, Colombia does have a little bit of a reputation for crime. I can tell you that that’s pretty much an outdated point of view. That’s all been cleaned out in recent years, and law and order has really been restored to the country. Now, having said that, there are certainly pockets of Bogota and throughout the country that are somewhat unsafe. You just need to do your research and be careful where you stay when you visit.

Your developers, if they’re successful and established, will already have moved to and be working from the regions of the country that are stable. That means things like infrastructure, law and order, electricity, internet and things like that. So you really don’t need to worry about it from that standpoint. Of course, if you’re visiting, as is the case with any Latin American country and, if we’re honest, many US cities, you need to be a little careful about what neighborhoods you go into. Also, pay attention to who you book transit with and things like that.

But, if you use some common sense, you’ll be fine. Or do it my favorite way, which is travel with one of your developers. Colombians in particular, although it’s true of all Latin Americans, are incredibly proud of their country and super excited to show it off. If you come down to visit your developer they will be more than happy, I’m sure, to drive you around, show you the sites and help you experience the local cuisine, the local culture and the architecture. It’s a real treat for both of you.

The Weather in Colombia

Right now it’s the early morning in Bogota, as you can see. It’s rather overcast. Bogota is known for having four seasons in a day, and I’ve seen pouring rain, and it’s a bit chilly right now. I’m sure later in the day it will be quite warm. And of course, we’re coming into summer because it’s South America and summer starts in December.

Traveling to Bogota is easy. There are direct flights from New York and other US cities, or you can transfer in places like Costa Rica, which makes it really quite easy to get here. The airport is large and modern and easy to navigate. When I came in last night, I had no difficulty getting through customs or anything like that, and it is visa-free to US citizens. And so, should you decide to make a hire in Bogota, or if you’d like to come down and interview developers, it’s really quite easy. So please consider Bogota when looking to recruit in Latin America.