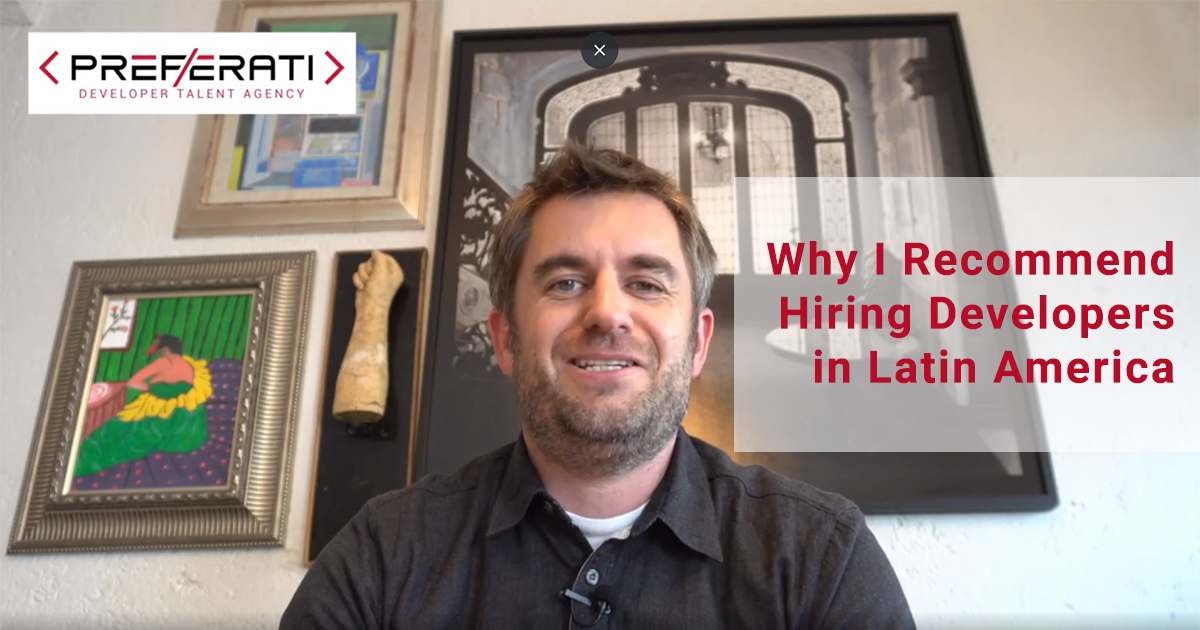 I’m in Mexico City today. Finding “A” players in software is hard. Everybody wants them, and so they’re hard to find. Whenever one of those sort of rough diamonds comes onto the market, they usually get snapped up by a company pretty quickly. And smart companies then invest in those people, and there’s a two-way path of loyalty, and that’s great.

Latin America is a Developing Market

It’s really competitive out there for top talent, absolutely. It’s super competitive. It’s just a little less competitive in Latin America. It’s a developing market. People are coming out of school or running the freelance game who haven’t quite been discovered yet. The “A” players, those 20 X-ers, those diamonds in the rough, are out there, and so I just seek to find them and get them in your agency.

I’m sure in 20 years it will be the same in Latin America as it is in the US now, and you’ll have to compete just as hard for top performers, and you’ll have to deal with poaching and recruiting and things like that. At the moment, it’s a little bit of an opportunity to seed your team with premium developers, those people who have the knack. Those people who have that natural piece that they don’t pick up in school, that makes them a top performer, can excel in your team in a very unique and really exciting way. They are out here, and they can be found.

If you’re running an agency, or even a development team of any sort, I think you definitely should keep Latin America open as an option. You’ve got folks who are in your time zone, who have quite a bit of cultural crossover with the US. You can relate to each other on a human level, quite effortlessly. Latin American developers generally have been involved with English for quite a while. Naturally, all of the training is in English, all of the support materials are in English, and actually, most of them have already done some contract work for US clients, and so you don’t need to know Spanish. You can communicate with them through both spoken and written English.

Adding remote team members to your staff, in Latin America, does save money. Still, you’re really going to be disappointed if you’re going into it with that mindset. If you compare it to the fully loaded cost of a full-time, salaried employee you’re going to pay about 2/3 of that to have a full-time, Latin American employee working remotely in your company, all costs considered. It’s finding an individual who’s typically going to work from their home or a co-working space, over high-speed internet, joining your team via video daily and really participate in your workflow in almost exactly the same way any of your domestic staff are.

If you’ve got any staff right now that are working from home part of the time or most of the time, it’s going to be very much like that. They’re part of your culture. They’re part of your team. They are involved at that level and when you do that, when you get someone of that caliber, someone who’s a free thinker, someone who has experience, someone who’s willing to advocate for their ideas and push their own point of view, and who’s going to invest in the good of your company overall, more than just trying to make it this day or just get these tickets closed, but actually build lasting products and contribute in a long-term sort of way; you’re going to pay a lot more than maybe what you heard of. It’s not $9 an hour, by any stretch.

The agencies I like to work with usually are not doing this so much for financial reasons as they are just running up against a talent shortage in their local market. This is where the true “A” players are just too difficult to recruit and retain in their market, and Latin America has just been coming online in the last ten to fifteen years.

Tech centers are blossoming all over South America, Central America, and Mexico. Universities have really come online with modern programs, competitive programs that are teaching current technologies and offering internships and experience that’s really producing competitive team members and these staff are really interested in working in the US market and gaining that edge, that additional experience. And so you find that you can help each other.

The Latin American employee is excited to be able to stay in their hometown, where they live, where their family is, and contribute back to their home community. They want this while at the same time honing their skills in the faster paced and often-times more dynamic environment of a US company, and so it’s truly win-win.

To make this work, you really have to drop the whole contractor-back office mindset entirely. You have to invest in these folks the way you invest in your core people. You need to look at this as a long-term thing. You’re hoping this person will be with you for a lot of years and you’re sending them to training. You’re showing them how you do things. You’re coaching them. You’re getting to know them on a personal level. You’re inviting them to more than just the absolutely necessary meetings for their job, but actually inviting them to participate in company planning and mixers and hopefully flying them out as often as possible. At least once a year to actually, in person, hang out with the team, meet the clients, and participate in planning and strategy.

To be Successful, You Have to Hire Properly

The great news is that broadband is prolific throughout Latin America and in the cases where these individuals don’t have it in their homes they can go to a local co-working space.

While I’m, of course, advocating for long-term employee-style engagements, it is a good idea to run contract projects with prospective employees, whether they’re domestic or Latin American, to find out, maybe they do have the skills, but do they have the skills in your company?

They might be able to write ‘go’ but can they write ‘go’ on your team, under your management, for your clients, documented in the way you need it to be? Can they work the hours you need? Can they communicate effectively? Communication goes so much further than English versus Spanish, but can they express a real concern or can they put forth and advocate for a real idea? These are all things that are almost impossible to learn in an interview setting and really just doing a few real-world projects is the best way to find out if this is going to work or not and how well it’s going to work.

Your Corporate Culture Will Get Richer

Integrating a remote Latin American developer into your agency can be very rewarding and can actually be a really strong contribution to your culture for a number of reasons. First of all, it brings another culture to your culture. And there are things that Latin America sometimes is better at, in terms of interpersonal communication, sort of a zest for the team, and that sense of family and commitment to each other.

These tech industries in Latin America are just sprouting up. We’re seeing skyscraper cities where there were just empty fields, not ten years ago, all over Latin America. Entire tech districts built out. And these folks want to put themselves on the map. They want to make a name for themselves, and so you get sort of an enthusiasm for success on your team. And that fresh spirit, that sort of ‘no, we’ll make this work. We’ll figure this out. We’ll put in the hours. We’ll dig deeper. We’ll look at the additional technology options to make this work and to make it right.’ They can sometimes be a fresh wind to your team that’s really helpful.

You Have to Figure Remote Out

Additionally; you have to figure remote out. Now, a lot of companies are already doing this because a lot of your domestic employees want to work from home, or maybe you’ve had a domestic employee who’s had to move to another city, but you wanted to keep them on the team. So you’ve already sort of figured out some aspects of remote. But figuring out what remote does for your company is that it actually helps you get your processes straight.

When communication has to be written, when spoken communication has to be packed into scheduled meetings instead of just sort of happening in the flow of the day, you get more rigorous about how you do it. Your processes, systems, agendas, and checklists start to take shape. Before you know it, your in-the-office workflow is actually benefiting from the systems you’ve built for your remote workflow, in ways you didn’t even expect.

It’s been my immense pleasure to work with a variety of Latin American developers and professionals in other fields over the last couple of years. It’s the very least I can do to sit here and recommend to anybody in the US who is in a position to be hiring and staffing up in development roles, that they consider Latin America. You absolutely owe it to yourself to at least check it out, absolutely.