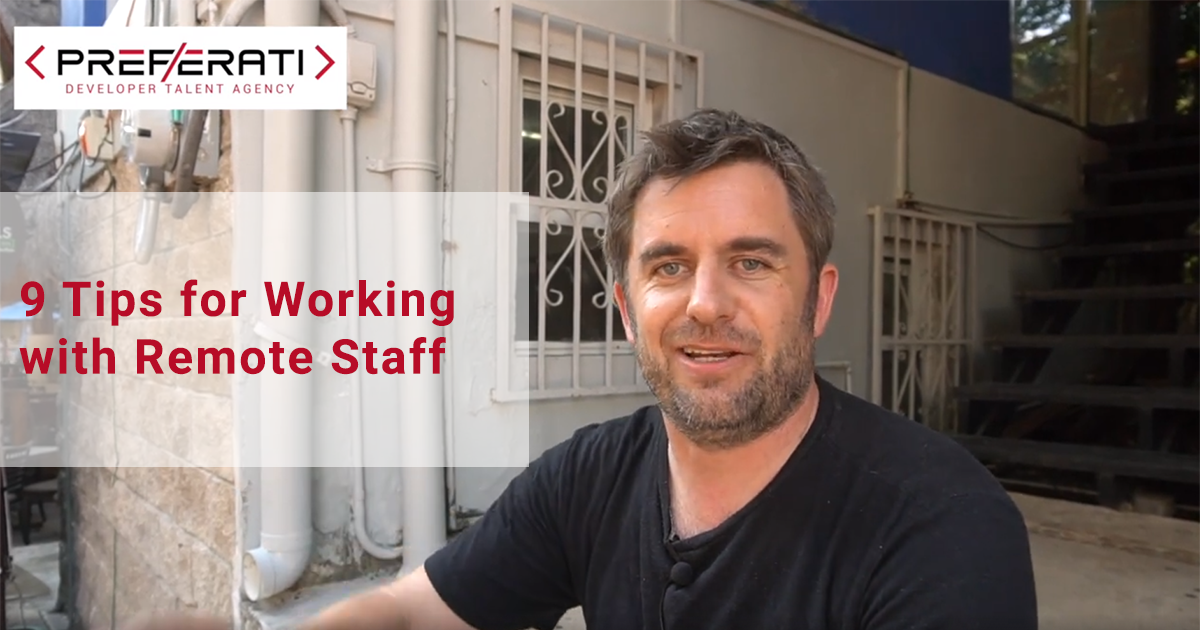 Hi I’m Matt Ives and today I’m in Playa del Carmen, and I’m going to talk about remote work, making it work and how to make things succeed when you have remote staff members on your team.

When you have remote team members you just have to manage things differently than you would with the in-office staff.

One of the keys to making remote work is to incorporate remote staffing into your morning stand-ups. If you are not doing morning stand-ups, they are very popular and effective management tool. Your team stands together for about 5 minutes every morning, and people go over what they are going to be working on that day, what they’re stuck on, what they’re concerned about, what they’re not concerned about and maybe share a few wins. This is a very powerful practice, but particularly powerful when you have remote staff because it kind of brings everybody together and everybody understands what’s going on as a team.

Obviously, when people are remote you can bring them in via video. It’s up to you whether you want to have everybody join the stand-up via video and do just a big zoom meeting. You know, “Brady Bunch” boxes with everybody talking on a group on a screen, your in-office people as well as your out-of-office folks. Or you can do a hybrid where you set up a conference room, have a screen and a camera in the conference room, and folks join either in person or via remote. I actually prefer the everybody on camera technique. It makes the stand-up easier for everyone to start, people are at their desks, they have their materials right in front of them, and it saves even those five minutes you spend chasing people and getting them to the stand-up. But however you do it, it’s a very powerful practice. It’s a powerful practice in any company, but when you combine it with remote working is really powerful.

3. Remote Staff Members Have to Continuously Promote Themselves

Your in-office staff is going to have a lot of opportunities to promote themselves in an impromptu way. They’re going to bump into you at the proverbial water cooler, or the bathroom or in the parking lot. And they’ll get a chance to chat about their day, what concerns they have, or just communicate how they’re feeling, how they’re integrating with the culture, and how they’re functioning in the organization.

Your remote staff is going to need to sort of actively, intentionally, bring that forward in the virtual world. So they are going to have to be able to talk about their day in chat and promote themselves. They just need to recognize that that is something that they have to be mindful and conscious about doing. For the rest of your in-office staff, it just happens organically; they don’t have to think about it.

4. Bring Your Remote Staff into Your Office in Creative Ways

The other way to make remote work is to bring your remote staff into your office in creative ways. I have one client who does yoga once or twice a week in their office. They actually do it on the webcam and invite their remote team members to do yoga in their home offices and participate. I think that’s a great idea!

If you go out for drinks after work days, why not Facetime in one of your remote staff? Even for two minutes, from the bar. “Hey guys, we’re having a drink, cheers!” And your remote worker can say hi and so forth. Take those little creative steps. I know it’s a little weird, but take those little creative steps to continue to integrate your remote staff into your team and pretend they’re not remote, pretend they’re with you all the time. Or even just take a picture of what’s going on and stick it on the Slack channel whenever there’s a get-together or something like that.

This kind of comes back to communication and verbal communication. When ad hoc meetings happen, when clients call out of the blue or when you guys sit down and start talking about an issue with a client or an idea, or something like that; take that second to ask, “hey should we dial in Miguel or should we dial in whomever in our remote team to be part of this chat?” Or if that’s not possible, or you forget, right afterward just ring them up real quick and say “hey, we just talked, this is what we talked about, do you have anything to add to that?” It only takes 30 seconds, but it shows your commitment and your organization’s commitment to making sure that your remote team members are part of the team, and keeping them integrated.

5. Draw Ideas Out of Your Remote Staff

The other thing that you’ll have to do probably more at first is draw ideas out of your remote staff. There’s a little bit of a shyness that often is the case as you get going. That’s true, if you think about it, every time you start a new job. But when you start a new remote job, there’s a tendency that that shyness just continues perpetually into the future because you start out shy and then that just becomes your role in the company. You don’t speak unless spoken to; you are not putting your ideas forward, you’re not challenging the status quo. As a manager, it is your job to say, “Hey Miguel, what do you think? Is this the smartest way to do this? Is this how you would do it? Do you have a better way to do it? Do you agree with the plan? Do you have a better plan? Why didn’t this go well? Do you have ideas of how we can do it better in the future?”

I know you want all of your staff to be doing not just the task they are asked to do, but to be thinking around the task, what else can they be doing, how can they improve processes, how they can prevent problems in the future, how can they increase efficiency and productivity, and delight customers more. However, sometimes remote workers don’t feel they have permission to bring that forward, so you need to encourage them to do that.

You really know you’ve made it when your remote staff is actually fighting for their ideas; they are not only putting forward their own opinions, but they are advocating for them and not dropping them when they really believe in their idea.

You are going to need to power through the language barrier. This is so important. Even if your remote worker speaks English very effectively, it takes time for them to be able to speak your language. Every organization has its own jargon, its own terminology, the way they talk about things, the particulars of various clients and staff. It generally takes at least 3 months before your staff is really fluent in your corporate language.

At the beginning it can be very frustrating, you communicate something and come to find out later that your team member really didn’t understand what was being said. You get frustrated and say, “why didn’t you say something if you didn’t understand?” And the truth is, they thought they understood. They thought they heard something different. And so, early on, you have to take that extra step and say, “hey, would you mind explaining back to me what you heard?” It’s okay; it’s not condescending. They don’t want not to understand what’s going on. Nobody wants to spend 5 hours working on a project that’s the wrong project just because they didn’t want to spend 5 minutes to understand better what was going on.

Sometimes, when someone is new to an organization, they again don’t feel the freedom to assert themselves and say, “hey, can we make sure I got this?” That’s another piece that you would have to draw out of them and say “can you explain to me what you understand to be the case here?” and just make sure that they got it.

Travel is absolutely a great way to make this work. Go visit your team in remote places or come to exotic places like this, go to the beach, meet your team at the beach. There might not be the time or the budget to bring them to you, but they might be able to travel to the beach, and you can travel to the beach, and you can get together as a team and hang out there and get to know each other. Do some team bonding, do some remote client meetings and everything like that, it’s an effective way to get together.

Ultimately, I would love to see you bring your remote staff into your office, I’d love to see you visit them in their towns, but at the very least, meet in the middle, get together, it’s just so fun and it’s a great way to get a tax write off to get to the beach.

This one is kind of difficult but one of the most important keys, especially when you have a remote staff member from a more developing country, and perhaps a more challenging background, is no special treatment. That is so critical for making everything work.

Your remote staff most likely will have much better excuses for showing up late for work, for missing days from work or for being tired and things like that. But ultimately, you have to hold everyone on your team to the same standards and work with them all on the same level. It’s sort of a slippery slope. Ultimately, everyone playing this game wants to really be at the same level, operating as a professional and knowing that they made it at a US company. If you play the special treatment card, you’re going to set a precedent it’s difficult to walk back.

Yes, it’s more difficult to get through the day in some parts of the world than it is in your town, but that doesn’t change the fact that this is equal pay for equal work. It’s a real job, and the expectations should be the same more or less across the board. And ultimately everyone on the team, especially remote team members, won’t respect you if don’t hold that standard.

9. Talk About the Little Things

Lastly, just the little things: engage in each other’s lives. Learn to watch soccer, if that’s what your remote team members are into. Talk about the sports that you’re into with your remote team members. You might be surprised that they’re watching the games you’re watching. Ask about their kids. Try to get pictures of their kids, send pictures of your kids, talk about your pets, share pictures of your pets, share pictures of vacations. These things might sound obvious and basic but they really go a long way, and I really suggest that you prioritize them.

Working with remote staff is never easy at the beginning, but it is definitely worth it. Try some of these tips out with your team and let me know how it goes!